Rehash v1.0... basically the same layout but compressed a lot more... maybe 20-40 percent less track but takes up about 1/3 of the space. Target size 8x16 plus a little, double deck, mains on lower level (shown), Piney Creek branch on upper level (upper level plan is still in the ether). A very small representation of Raleigh Yard could possibly be on the far left side of the lower level, with the wye in the corner where the mains loop in Stretcher's Neck tunnel. 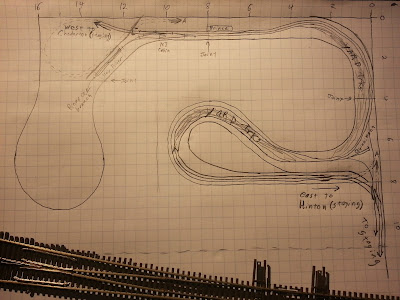 Posted by Jon Myers at 1:18 PM No comments:
Email ThisBlogThis!Share to TwitterShare to FacebookShare to Pinterest

There comes a time in any model railroad where you stop and consider whether to keep going, or turn around and go a different direction. Sometimes it's precipitated by a move, or by a loss of interest in the hobby.

In my case, a leak from the kitchen above soaked a portion of the layout, and I was laid up with a broken ankle and not able to do damage control immediately. When I did get down there, I found the benchwork for the Prince, WV section was probably beyond saving. Doesn't look like it got into the Digitrax gear, so I stripped this section of layout (saving track and electronics) and threw out the benchwork. I'm considering my options, but I may strip the entire thing, and start over. After 5 years of this blog, still no scenery and incomplete track/benchwork... maybe I should build something easier (smaller) with a clearer vision from the start instead of trying to add 8 feet at a time until I have more benchwork than I know what to do with.

It just might be time to hit the reset button.
Posted by Jon Myers at 9:18 PM No comments:
Email ThisBlogThis!Share to TwitterShare to FacebookShare to Pinterest

Winter project... get the west end of the railroad functional! 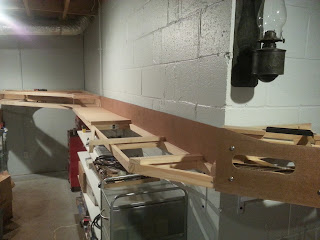 The above picture is looking along the new benchwork from where it connects to the existing benchwork. Along here will be west mainline staging at the lower level, and Raleigh yard on the upper level as well as the wye at the far end. 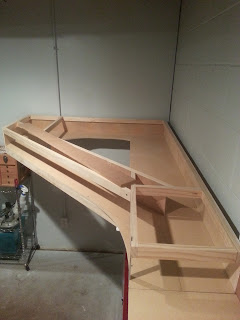 Above is an elevated view of the new benchwork in the corner... you can see where the staging will be (4 double-ended, double-trainlength tracks) the access hole in the middle, and the upper benchwork for the yard and wye. 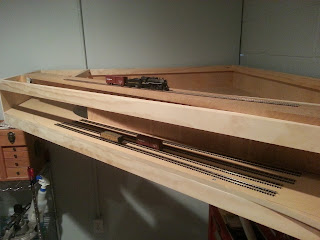 Above is a closer view of this area with some flextrack and stand-ins to better visualize the scale of it.

Time to hit the hobby shop for their entire stock of track... about five times over, the way the supply of track has been for the past few years.
Posted by Jon Myers at 7:38 PM No comments:
Email ThisBlogThis!Share to TwitterShare to FacebookShare to Pinterest

With the weather turning into "modeling season", I figured I'd try to get things moving again in the basement. I'd stopped building benchwork just short of Raleigh yard and west mainline staging (Charleston / Handley / Thurmond) because that side of the basement hadn't been painted yet. Well, today I hung plastic and fired up the paint sprayer. 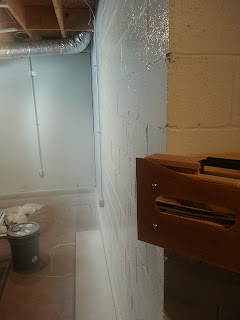 Top level will be Raleigh yard on the Piney Creek branch, below will be the west mainline staging and return loop.

I plan to build it to allow expansion to continue, including the branch up to Pemberton for interchange with the Virginian.
Posted by Jon Myers at 12:28 PM No comments:
Email ThisBlogThis!Share to TwitterShare to FacebookShare to Pinterest

I believe one key to having an enjoyable model railroad room is avoid clutter. 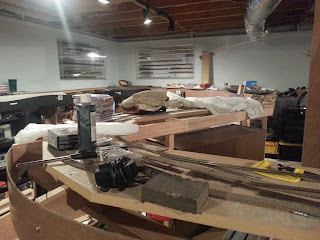 I guess I failed that one. I'm working on it though.
Posted by Jon Myers at 5:41 PM No comments:
Email ThisBlogThis!Share to TwitterShare to FacebookShare to Pinterest

In the previous post back in March, I was considering my options for what to include in the layout. I've had a very busy year and don't expect things to slow down anytime soon, so I think the buzzword is "simplify".

Mainline west of Prince at this time will go to staging under Raleigh, along with a return loop to allow continuous run (perhaps I'll have this layout on the Piedmont Pilgrimage someday?). The Piney Creek branch will go to Raleigh yard, and eventually may reach Pemberton for that junction with the Virginian. Eastbound on the mainline past Quinnimont will temporarily go to a return loop until the design for that end of the layout is finalized.

The most recent work has been simply trying to make headway on organizing the room. Lots of shelving for books and other curiosities under the layout makes it feel more inviting and less like a storage room. 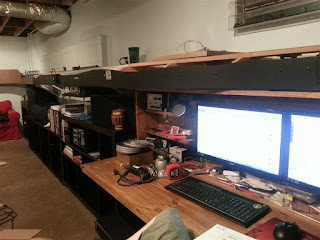 The desk/workbench in the foreground is attached to the wall and the work surface can fold down out of the way when working on the layout.
Posted by Jon Myers at 12:31 PM No comments:
Email ThisBlogThis!Share to TwitterShare to FacebookShare to Pinterest

Which direction to go?

I've been playing with track planning and whatnot tonight, and I'm coming to a fork in the road with this layout. I've kept aisleways huge and compression very minimal so far, and in some ways that has come back to bite me. There's two ways I can take the design from here, and they're explained below.

1. Increase level of compression dramatically for future additions, add helixes, and increase grades on the layout. Hinton yard would be awkwardly crammed into a corner over the washer/dryer. Meadow Creek would also be seriously crammed into who knows where, if I could fit it at all. Its branch would be nothing but a staging stub. Thurmond would be just a little stump of a layout segment bereft of its yard, or at most a couple stub-ended tracks tucked under another scene.

2. Maintain the current open-room feel and linear flow to the layout, but some iconic locations (Thurmond, Hinton) would be present in name only as staging areas. Beyond the current Prince and Quinnimont segment, I'd have Piney Creek branch up to Raleigh yard, the wye, staging for the branch going towards Beckley, and a continuation of this end of the layout across the VGN diamond at Pemberton, WV (complete with display loop for VGN trains) to the jointly-served Affinity mine. I'd probably have room for a decent representation of Meadow Creek and may be able to include some of the NF&G in reasonable form as a second deck or "mushroomed" area.

I started out with a LDE based on a location near Hinton, but soon switched to Prince and Quinnimont as being center stage for the layout since that area along with the Piney Creek branch could stand alone as a decent layout. I still have the CW Cabin (Hinton) LDE, it has suffered some storage wounds but would be ready to go with some minor repair and track cleaning. But on the other hand, I could gut it for its switch motors and such, and call it an experiment that is now over. There's only so much I can fit in half a basement (other half is the garage, and that's a whole 'nother ballgame... not even my layout is allowed to take over the garage!)


Posted by Jon Myers at 6:32 PM No comments:
Email ThisBlogThis!Share to TwitterShare to FacebookShare to Pinterest
Older Posts Home
Subscribe to: Posts (Atom)

This blog is about an N scale model railroad representing a portion of the C&O Hinton Division as it appeared during the 1950s.

Follow along as I build this N scale (1:160th) representation of railroading's past.